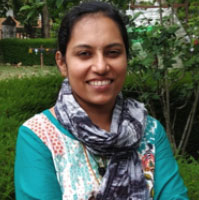 Divya Jose started her research pursuit in synthesis of conducting polymers under the mentorship of Prof. Rani Joseph in Department of Polymer Science and Rubber Technology in early 2012. She joined Bharath Matha College as Asst. Professor in chemistryin 2013 and continued her research as a part-time scholar of the Department. Meanwhile she has supervised a UGC minor project on dielectric studies of polypyrrole-ZnO nanocomposites. Later in 2017, she joined Honey John’s research group under Faculty Development Programme during which she has synthesized conducting polymers and their hybrids with polydimethylsiloxane composites for energy harvesting applications such as triboelectric nanogenerators. She has three Indian patent to her credit based on the ongoing work.